In a bid to curb the fall in workers’ remittances through official channels, the Central Bank (CBSL) has decided to extend the incentive of additional Rs. 10 per dollar per month while absorbing transaction costs.

The CBSL said that after reviewing the applications of Sri Lankans working abroad, it has decided to pursue the payment of additional Rs. 8 per dollar for workers’ remittances, paid in addition to the incentive of Rs. 2 per dollar under the “Inbound Workers’ Remittances Incentive Scheme”.

The incentive is for workers’ remittances channeled through licensed banks and other formal channels and converted into rupees until January 31, 2022.

“The decision to pursue this additional incentive of Rs. 10 per dollar is in response to the favorable developments seen in worker remittances so far in December 2021,” CBSL said.

It has also decided to cover transaction fees incurred by Sri Lankans working abroad up to a set limit when remitting their money to Sri Lanka through exchange houses and/or banks. .

CBSL said a large number of Sri Lankans working abroad will now be able to send their money free of charge.

Operating instructions in this regard, including the start date, will be issued by CBSL in due course.

Renewing new concerns among stakeholders, workers’ remittances in the first 11 months of this year plunged $1.12 billion or 18% to $5.16 billion from the corresponding period of 2020.

November saw an inflow of just $271 million, the lowest for a month in recent history, and reinforced the acceleration of the decline. Compared to a year earlier, the November 2021 figure is down 56% or $341 million.

Remittances from Sri Lankans employed abroad have constituted a significant flow of foreign currency into the country, with an annual average value of more than $7 billion in recent years.

What the CBSL data does reflect, however, are inflows through banking channels and the $1 billion plunge despite multiple incentives being offered. This also highlights the fact that entries continue to increase through unofficial channels, resulting in a higher conversion rate against the caps set by the CBSL.

Analysts said that dollars through illegal gray channels fetch Rs. 230 each or more, hence the upward revision of the incentive and bearing the transaction cost can encourage inflows through the channels. banks as CBSL steps up surveillance to curb unofficial inflows. 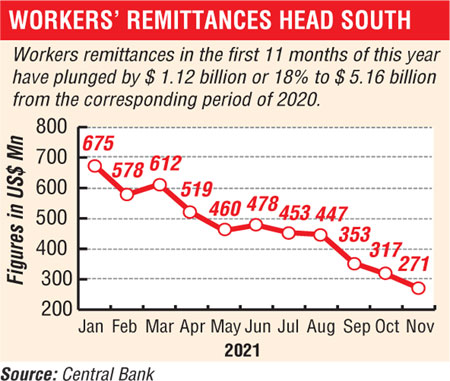 Since the middle of last month, CBSL has issued a plethora of public advisories warning against the use of illegal channels for remittances.

CBSL said it has received reports that some Sri Lankans residing abroad are sending funds to their dependents in Sri Lanka, knowingly or unknowingly, through various racketeers. CBSL said it was aware that there had been instances where some brokers collected foreign currency from Sri Lankan employees in other countries and credited their dependents’ accounts with rupees in the form of cash or transfers through the financial system.

“The public may be unaware that he is committing offenses punishable by law for violating the provisions of the Money Laundering Prevention Act. Additionally, available information indicates that these transactions may be related to drug trafficking and other illegal activities,” said one of the previous public notices.

“Therefore, the CBSL hereby advises all Sri Lankans residing abroad and their dependents not to be victimized by such illegal activities knowingly or unknowingly,” he added.

Subsequent notices issued by the Financial Intelligence Unit of the CBSL were more emphatic. A notice read: “By using informal money transfer mechanisms, you may unknowingly become part of a money laundering or terrorist financing network.

At the same time, banks have stepped up advertising to convey the same message in a coordinated effort.

The CBSL has also appointed a working committee to study and suggest new remittance channels for Sri Lanka and make recommendations on reducing the cost of remittances, after identifying the need to introduce new low-cost remittance channels with the aim of increasing remittance inflows. foreign remittances while discouraging the use of informal channels.

The recent implementation of a nationwide remittance mobile application titled “SL-Remit” to attract more funds to Sri Lanka with features such as user self-registration, ability to connect to global money transfer operators and global fintechs to facilitate funds transfers from any country, and instant funds transfers to any bank account or mobile wallet in Sri Lanka followed the recommendation of the committee of job.